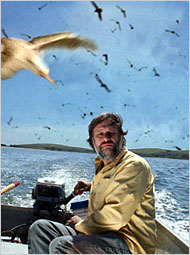 Slavoj Zizek, certainly one of the most fun film theorists to read — if you’re into that kind of thing — has become a movie star himself once again, this time in a film by Sophie Fiennes. It’s called The Pervert’s Guide to Cinema, and focuses heavily on the psychosexual fantasy world with which the cinema is so imbued. Fiennes apparently has managed to insert Zizek into scenes from several films to critique them as they play. What decadent fun!

Unfortunately, it’s playing at the MoMA, not just any theater near you.