Two weeks ago, finishing Gravel Worlds got a nice long recap in these pages, and now I’m going to attempt to do justice to my other pinnacle event of the season, the Dakota 5-o. I had heard so many good things about this race last year that when the registration opened in something like March, I set my alarm and signed up, clinching one of the 600 spots. That click of a button would influence my entire mountain bike season, from buying Black Betty to racing in the Marathon class in the Psycowpath race series all summer. Add in my weekly Women of Wednesday ride, where I lead a group of beginner through experienced women in off-road riding, all the gravel riding, and my daily commute and I felt ready to tackle the finest singletrack the Black Hills had to offer. 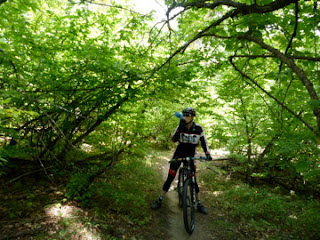 Well, that is until we did a little course recon on Saturday. After a nice long drive with Nathan Swanson and Matt Gersib in caravan with Casey Sheppard and CVO on Friday, we settled in to camp and beers by a beautiful little stream in the Spearfish City Campground. Scott Showen had already been in town a couple of days, securing Fort Lincoln just a bit to the west of Camp Omaha. Yeah, we’re like that 🙂

So Saturday morning comes, we sleep in a bit, aided by the crisp fall air, roll in to a yummy burrito place, and then pack up for a ride. Instead of taking the steep 3 mile gravel climb out of town, we decided to drive to the trailhead to hop straight onto the singletrack. No use burning energy the day before a race on stuff you know how to ride without a problem. Though Casey was running support and not racing, she had her bike along, and since I wanted to be extra sure I didn’t overdo it, I was happy to ride with her instead of try to keep up with the boys. She’s only been riding since the start of the summer, but she is really putting in the effort and the miles.

So we hopped into the singletrack, and were immediately greeted by something Nebraska trails really don’t have. Rocks. Lots of rocks. And steep edges along the track. Take a deep breath. Oh wait, altitude. Excitement about the race was quickly replaced with some major apprehension. Can I really do 50 miles of this? And if I’m feeling like this, what the hell must Casey be thinking? The fellas are way ahead, we’re all kitted up, and it’s time to put on the gameface, ovary up, and ride this thing!

We took it nice and slow, trying to learn to read the lines over the rocks and trust the bike to do what it’s built to. This isn’t a road bike, after all — the tires and suspension (which was new to me at the beginning of the year) are meant to deal with this kind of terrain. After awhile, Casey decided she’d had enough of the climbing and told me to go on so I could round out 5 miles out, giving me 10 for the day. We met up with the rest of the crew, descended back to the cars, and headed back to town to get our race numbers. 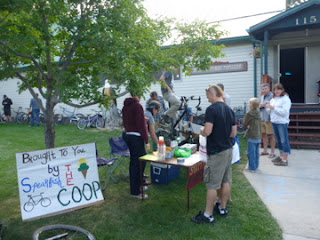 Tall-bike powered ice cream churn courtesy of the Spearfish Bike Co-op.
The check-in was really well organized, and it never hurts to have beer from the local brewery on sale to ease in the process. I picked up a pint of Crow Peak porter to accompany my fresh-churned vanilla ice cream. If you’ve never tried a porter float before, I highly recommend it! When we picked up our packets, we were asked if we wanted to start in Wave 1 or 2, basically a split of people in race mode or in tour mode. I had asked several veterans for their advice on placement, and the consensus was to line up at the back of Wave 1 — those who intend to finish in under 6 hours. After the day’s recon, I was far less confident in this decision, but remembered that part of the reason that wave was suggested to me was that in that position, I’d be likely to spend less time caught in traffic with less skilled riders but still wouldn’t be in the way of more skilled ones. Good call. We headed back to camp and made dinner, with everyone gearing up for an early night and an early morning. 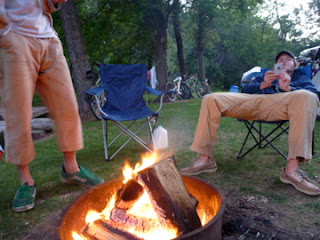 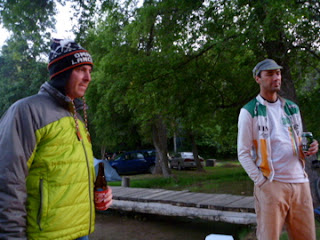 Showen’s hat and jacket are an indication of how chilly it got. 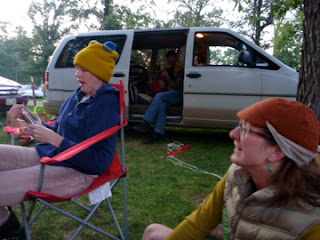 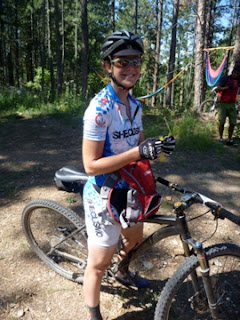 No bacon for this happy vegetarian. Just a PBR and a smile…”only” 12 miles to the finish!
At this point, I knew I was going to finish, and with a smile on my face. The worst of the climbs were done, the mood was awesome at that stop, and Casey took my picture with an “only 12 miles to the finish” caption. I think I said something along the lines of “that’s like one way through Wilderness,” and totally cracked myself up with how much harder it would actually be.
I left confident, though, and had overheard a couple other riders talking about the upcoming ridge and amazing view. About that ridge. Holy cow, that was some scary, gnarly stuff. I ended up walking a bunch of little rocky switchbacks just because I felt like I might fall on my face if I stayed on the bike. Having one faceplant already this year had me very adamant about not adding another, especially here and now. So I walked and enjoyed the scenery, apologizing for my newbie Nebraskanness to riders coming up behind me. 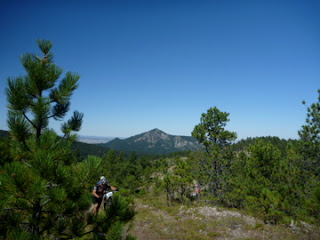 “Look Back!”
At the end of the ridge, the race organizers had placed a little sign that just said “Look Back!” The photo above, and pretty much the only one I stopped to take, was the view. Absolutely breathtaking, all the more so because I’d accomplished it all on my own humanpower. I took a minute, then got back on the bike and down to business. We had a few descents and one little climb, then a long climb up a gravel road, where I again passed several folks pushing their bikes who’d passed me earlier. I smiled and thanked them as they spit out chagrined cheers of “good job” and “keep it up” — thanks for the prep, Gravel Worlds!
Then, before we knew it, we were back on the first few miles of singletrack of the day, but this time in reverse. And downhill. WOOOOOOOO! Almost there! I flipped through the turns and over the rocks, recognizing things here and there to know I was getting closer. Then came the gravel roads back in to Spearfish, and I absolutely let loose. After spending the majority of the day in my lowest three gears, I went all the way to the smallest cog and spun out at top speed down the road, passing a few people and grinning like mad. I had done it!
As I came down the pavement into the last turn, there was Ryan Feagan, cheering “Lincoln, Nebraska, represent!!” on the side of the street. I threw up some devil horns, rounded the corner, and tried to keep my cranking momentum through the false flat to the finish. I high-fived some little girls. Yes, chicks can race bikes. I crossed the finish line at 6 hours, 52 minutes, putting me 8th in my age division and 36th for women overall. Mission accomplished.
I can’t possibly thank everyone adequately, so if you feel like you might’ve helped, you probably did. But thanks do go to my teammates on Sheclismo for helping build a supportive women’s scene in Lincoln, Joyride/Specialized for the bike, Casey for her outstanding aid station presence, and all the veteran riders from Lincoln and Omaha who’ve offered advice, support, encouragement, and challenges over the last 16 months. It’s hard to believe that it’s only been that short of a time ago that I first rode singletrack.

3 thoughts on “Weekend in the Black Hills”