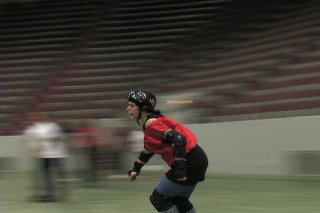 On Sunday night, Robbie, Becca, Pat and I went up to Omaha for the Hot Shops Film Festival awards ceremony. It was decidedly awful, with an MC who referred to himself as a “local celebrity” (he works in advertising for KFAB radio) within the first 5 minutes of taking the stage. Sexist jokes, comments on how horrible the script he didn’t write was followed by jokes of his own far more terrible, and several call-outs of 3 people who took vegetarian meals without having pre-ordered them (all three of those seated at our table), only scratch the surface of the torment. We left shortly after finding out we hadn’t won — with the blessing of a cool guy who won the documentary category, seated at our table — and went to the 49’r for a few beers before heading back to Lincoln.
I can tell I’ve gotten busy all at once, because just like at the start of a new semester, I’m forgetting regular events and not checking my schedule book enough. I really need to get the Avant Card job out of the way; one more week, and I should be through the 2-weeks period.
So I’ve been spending the last hour or so “shopping” for all sorts of video equipment to round out the collection, and wouldn’t you know that my total is already at $2,500? Thankfully, however, it looks as though the candidate is going to finance the purchase, and I just have to figure out how to ensure that the equipment will be mine at the end of the race. I don’t think it should be a problem, since I doubt he really needs a lav mic system, dv deck, and lights, but I’ve got to start covering my ass. I’m meeting with a tax advisor on Friday. 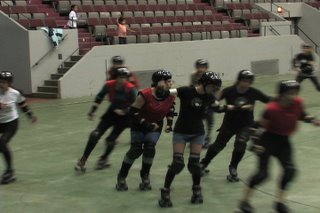 Tomorrow, I go to Pershing to figure out how I can hook up to the JumboTron. And I need to get myself out of 24p manual fixation and switch to SportsMode(TM) for this derby business. Included are some video stills taken from an earlier practice.