This weekend, I participated in my first national cycling event, the US Gran Prix of Cyclocross New Belgium Cup in Ft. Collins, CO. To say I had a good time is an understatement. A recap…with photos courtesy of Megan Kaminski Doloto, Anne Savery, and Chris Wolff.
I was adopted for the weekend by the TMCX team for the drive and the weekend, and they really took me in like family. It was awesome. I raced at 8:45 both mornings, and at a large venue with races on course the whole time, warm ups are challenging. (They’d be impossible later on Saturday, as driving cold rain hit…) Matt set me up on a trainer, blocked from the cold northwest wind, and I warmed up the legs and got to feel all pro in my attitude. Being looked out for just plain rules. 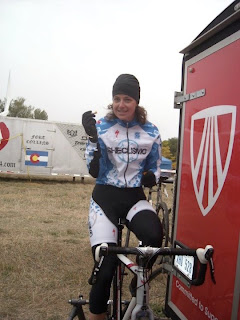 After warming up, I headed to the call-up line, cozy down jacket wrapped around me, to get lined up, Matt at the sidelines waiting as long as possible to take my layers. Day 1, I was in the second row of 8. They had both a Category 2/3 Women’s and a Category 3/4 Women’s race going off together with a 1 minute gap in between, and I was in the 3/4 group as a 4 on the upper edge, testing waters for moving up in category. And there were 28 others with me. After lining up with 5 others last weekend, this was a big, exciting change.
Didn’t get the best of starts, but probably made it about 7th or 8th into the holeshot. Then, it was time to settle in to loose, sandy descents and try to hold position. Picking defensive lines came in handy, as I could swing through and pop out of the switchbacks faster than most behind me. It was long climbs on which I struggled. That, and the trail was still really, really bumpy. 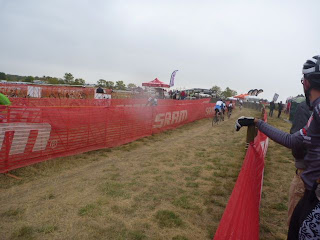 So bumpy, in fact, that a not-quite-tight-enough saddle slammed itself down with the nose tilted way up going down a fast descent on the second lap. Crap. Even if I’d had a pit bike, I don’t know if I would’ve stopped for it, since I was in a nice back and forth battle with these ladies. They’d catch me going up hill, and I’d get back on their wheels on straightaways or technical sections. So I ended up doing a lot more standing and pedaling. 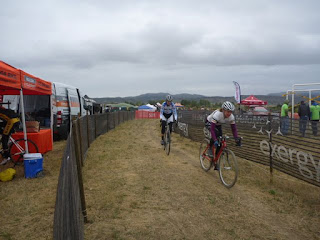 This was also my first experience with a flyover. Fun stuff! Run up the stairs on one side, zip down the ramp on the other. 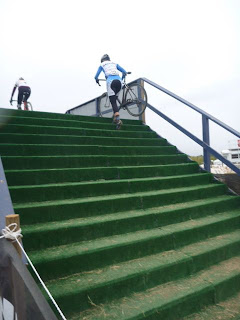 Here’s a look at the dry course Saturday morning, with the annoying terrace cutouts. These really kept us from picking up much speed. 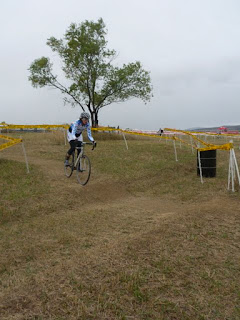 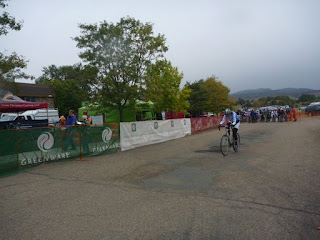 After my race Saturday, in which it was just sprinkling, the rain set in for real, making for sloppy and cold races for the TMCX team and Elite races of the day. It never got cold enough to snow, but it rained steadily into the evening. New experience for the morning: mud. 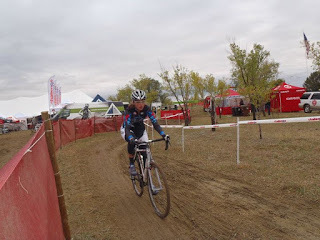 I woke up not at all motivated to race, and quite apprehensive. Now, I know I’ve been mountain biking for a couple years, and I’ve been commuting in snow and ice, and on top of that, I have a lucky propensity to somehow stay upright when running into obstacles…but handling muddy conditions in a race situation on skinny tires had me nervous. A little chat with Mark about lines to choose, when to take advantage of grassy sections left, and the fact that the greasiest spots would likely be rerouted, and I was feeling a little better, but still not that great. I summoned this image. 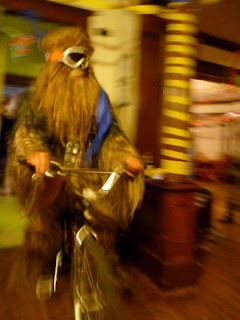 CVO on his birthday riding laps in the D Street Mansion in a Chewbacca costume. Game face. Got on the trainer, put some Freedom Call on my iPod, followed by some Lightning Bolt, changed from the fleece jersey into the black longsleeve, and I was ready to go. 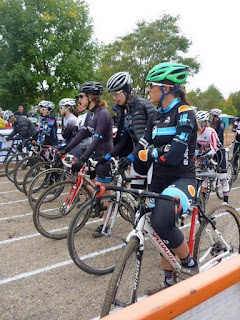 Not as many women took the line on Sunday, and I got a front row spot. Awesome. I wasn’t going to blow the start this time. The whistle blew, and I sprinted into the holeshot 4th wheel. Rafal had warned me right before the start that the first turn was really slick, so I let off the gas just briefly when we hit the mud. Good plan. First two women were down, bikes tangled. Third woman went down trying to avoid them. And suddenly, there I was, riding right through the slop and into first place. Whoa. Calm the butterflies and focus. The first section had lots of muddy turns, and I was nailing them, keeping my position and making it hard for the faster riders to get around me. Once we hit the climbs, though, a few popped around me, especially since the uphills were more straight up Sunday, with switchbacks taken out. My lungs were burning, not able to keep up with what I wanted them to do. 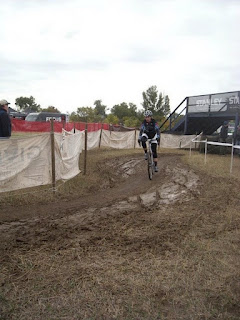 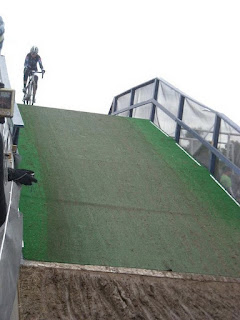 The flyover was crazy on Sunday, since the bottom was full of deep, sloppy ruts. Audible “oh, holy crap” came out of my mouth the first time, which I think amused my photographer superfans. Sliding through it and into the sharp right hand turn felt awesome, though, and I was happy to stay upright the whole race. 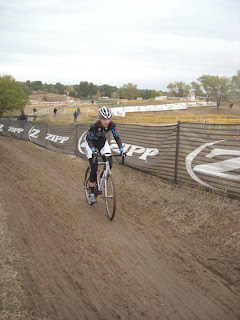 After two laps of battling it out for 7th, I ended up in 8th for the day on Sunday. Top ten achieved, lots learned, and then, with better weather, a great day of spectating. By the time the pros raced, the track was worn in like sweet singletrack. Lucky!

Big thanks to all the Nebraskans out there supporting and cheering, congrats to all who took the line and raced, and major thanks to the the Trek Demo Truck for hooking me up with a sweet, super fast Cronus CX demo bike to ride. It made me feel so much faster, I even wheelied it a few times! (Yeah, not intentionally, but it’s so light, I couldn’t help it.)