Last fall, Nate and I went to TIE’s Expo on a cold, rainy night. It was probably the best cinematic experience I’ve had.

Since 2000, the internationally-based TIE festival has been a leading champion of artists still working in the medium of film, with a particular focus on both new and historical avant-garde cinema. TIE returns to UNL with two new programs specifically selected for The Ross by TIE founder/director Christopher May. The exhibition features an eclectic range of experimental films that illuminate the continuing vitality and beauty of celluloid, while subtle and at times obvious philosophical and thematic curatorial gestures conduct the flow of the programs.

TIE wishes to give special thanks to the Director of the Ross Media Arts Center, Danny Lee Ladley, for making this event possible. 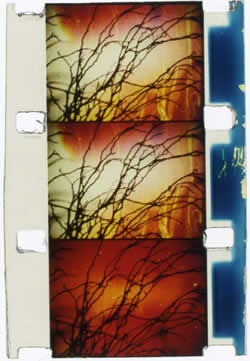 Pan of the Landscape
(Christopher Becks, 11 min., Canada, 16mm, 2005)
Pan of the Landscapereflects Brakhage’s influence … but soon differences begin to appear … the use of painting on film as means of achieving a lyrical, visionary freedom of light and color is deeply undercut, as the solid stuff of the world begins to resemble a bit of a prison. 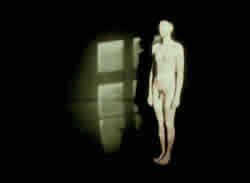 Vom Innen; von aussen
(Albert Sackl, 20 min., Austria, 16mm, 2006)
“Von Innen, von Aussen is a wonderfully unnerving, scrutinized, study of the human body within the context of its environment. The film opens with an empty apartment set in motion, revolving around a fixed point. This introduces the kinetic fixation that Sackl explores thoroughly within the film, the revolution. Implications of the revolution within man’s own self image and man’s historic worldview seem to be the larger conceptual concerns of the work. The revolution is then applied to man, himself, where Sackl plays out in a score of variations on the theme. At first, we see an unidentified nude male subject revolving clockwise on his central axis in front of a black background. It is evident that the backdrop is part of the apartment, but it clear that Sackl intends it to be an empirical environment for one portion of his study. Sackl then sets the revolving man in motion back and forth across the face of the backdrop. Sackl continues his formal investigation sending the revolving man back and forth in space.

The next major development is that the image splits and we view the man in stereo. The two men’s revolutions are synchronized at first, then each takes on his own timing and direction. At this point the viewer could easily define the film as simply a visual analysis of the male figure in highly ordered motion, but then Sackl presents the environment as variable. Suddenly, the black background is lifted and anonymous natural background is presented. The landscape is initially vacant, but the spinning man soon enters stage right and makes his way back and forth, revolving all the while. The film soon cuts back to the black background where more variations are played out, the most noteworthy being the superimposition of the man’s front and back. The visual bio-morphism is totally bizarre. Throughout the remainder of the film, the environment continues to shift between the apartment, natural landscapes and the black backdrop. In the end, the empiricism of the blackened space is beautifully tainted by rays of sunlight that are projected onto the scene from a window behind the camera.

Ultimately, the film has a truly meditative quality, a meditation that encompasses our notions about our bodies and the rules that govern it, both environmental and self-imposed. The precision of the filmmaking is overwhelming, in a way that is echoed in the movements of the male model. Something within the tight order applied to the man’s body brings to mind the iconic work of Leonardo de Vinci, which imposes perfect geometries atop the human form.”
-Noah Manos, TIE 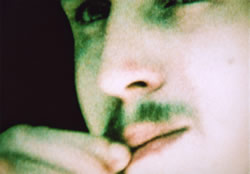 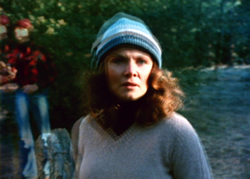 The General Returns from One Place to Another
(Michael Robinson, 11 min., U.S., 16mm, 2006)
“Learning to love again, with fear at its side, the film draws balance between the romantic and the horrid, shaping a simultaneously skeptical and indulgent experience of the beautiful. A Frank O’Hara monologue (from a play of the same title) attempts to undercut the sincerity of the landscape, but there are stronger forces at play.” 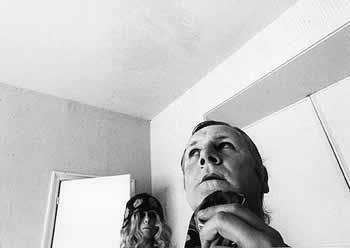 Living
(Frans Zwartjes, 15 min., Netherlands, 16mm newly restored print, 1971)
Zwartjes’ masterwork and his most favorite film. “Living has an uneasy, indefinable atmosphere. This strange swaying of the camera and the music that keeps going on and on…” Living demonstrates the cinematographic mastery of Zwartjes. He is the main character of the film and handles the camera himself, pointing it towards himself with his hand held out. Zwartjes: “I was as strong as a bear in these times.” The film is part of the series ‘Home sweet home’, in which Zwartjes explores the house in The Hague he had just moved into at the time. His wife and muse Trix plays the other role. The two characters move restlessly through the house. The film was made using an extreme wide angle lens (a 5.7), which gives the image a strong sense of estrangement. 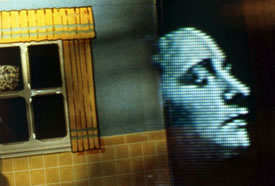 Fourth Watch
(Janie Geiser, 9 min., U.S., 16mm, 2000)
The ancient Greeks divided the night into four sections; the last section before morning was called the fourth watch. In these hours before dawn, an endless succession of rooms is inhabited by silent film figures occupying flickering space in a mid-century house made of printed tin. Their presence is at once inevitable and uncanny. A boy turns his head in dread, a woman’s eyes look askance, a sleepwalker reaches into a cabinet which dissolves with her touch, and hands write letters behind disappearing windows. The rooms reveal themselves and fill with impossible, shadowed light. It is not clear who is watching and who is trespassing in this nocturnal drama of lost souls.

Outer Space
(Peter Tscherkassky, 10 min., Austria, 35mm, 1999)
Foreign bodies penetrate the images and cause the montage to become panic stricken. The outer edges of the film image, the empty perforations and the skeletons of the optical track rehearse an invasion; they puncture the anyway indeterminate action of the film . . . a shocker of cinematographic dysfunctions; a hell-raiser of avant-garde cinema. 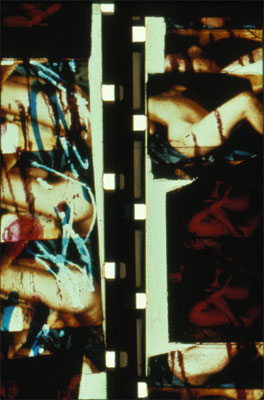 Fuses
(Carolee Schneemann, 25 min., U.S., 16mm newly-restored print, 1965)
A silent film of collaged and painted sequences of lovemaking between Schneemann and her then partner, composer James Tenney; observed by the cat, Kitch.

Fuses was recently preserved by Anthology Film Archives with support from the Andy Warhol Foundation for the Visual Arts and the Film Studies Center at the University of Chicago.

“The film was preserved from the collage original, which is as much a celluloid sculpture as it is a movie. The hand-spliced reel consists of footage shot on multiple film stocks, is painted on both sides, contains sections that are composed of splicing tape and is what you might call funky. All the prints we’ve seen of FUSES were made from later generation sources than the original. Thanks to the content of the footage and the construction of the object, Carolee was only ever able to make a reversal positive back in the late 60s. She used this master to do some stretch printing and eventually make an inter-negative, which resulted in a lot of built-in contrast, darkness, and overall softness to the image. The new print, which was made by Cineric Inc. in New York City, matches the vibrant color of the original in a way that the old prints never could. It is really something to behold.”
-Andrew Lampert 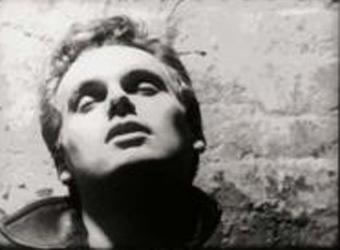 Meat Packing House
(Eduardo Darino, 17 min., Uruguay, 16mm, 1981)
While turning objectification and commodification on its head, this propagandist government film by Uruguayan filmmaker, Eduardo Darino, presents an overview of the process on meat packing in Uruguay. (Darino would eventually set up a small film studio, located in the sex district of Manhattan.)

“The film is absolutely hilarious with a real grindhouse feel (no pun intended) coming from both the music and color palette. Meat Packing House shows the incredibly clean, humane, and sexy side of cattle slaughter. And at every turn we are reminded by real life Uruguayans that they really do have “the best beef”. Known for “good beef and good football”, this place looks like a tourist’s dream come true. People and cattle alike sunbathe on the beach and then the beautiful men and women go out to extravagant beef parties where meat platters flash in front of the camera…”
-Nick Army, TIE