“This guy’s the champion,” said Patricia Brennan, a behavioral ecologist, leaning over the nether regions of a duck — a Meller’s duck from Madagascar, to be specific — and carefully coaxing out his phallus. 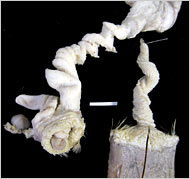 The champion phallus from this Meller’s duck is a long, spiraling tentacle. Some ducks grow phalluses as long as their entire body. In the fall, the genitalia will disappear, only to reappear next spring.

“So what does the female look like?” she said. “Obviously you can’t have something like that without some place to put it in. You need a garage to park the car.”

Female ducks seem to be equipped to block the sperm of unwanted males. Their lower oviduct is spiraled like the male phallus, for example, but it turns in the opposite direction. Dr. Brennan suspects that the female ducks can force sperm into one of the pockets and then expel it.