Yesterday was the last shooting day for Coons, the USC film I’ve been working on. I had a really good time with it, and I certainly learned a lot. 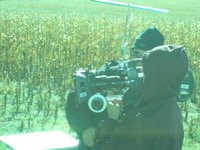 It was funny how many times I was softly criticized for living in Nebraska, though. Even when I’d say I’d lived on the East Coast (i.e. I’ve seen another place, decided to come back), or explained the luxuries I have here (an inexpensive yet large house, the fact that I built a darkroom in my basement — which, note to self, I should really use more), these all seemed to fall on deaf ears. (Part of the problem may have been that the local crew outside of me were all people who hadn’t really “gotten out” yet; the “sell” to come to L.A. probably worked better with them.) And you know, it really doesn’t make sense for me to be in L.A. If I want to film the landscape here — if that’s what inspires my experimental work — then why should I leave? Sure, I may make more money if I unionize, but though I had fun gripping for a week, would I want to do that all day, every day? Probably not. And that’s just the way L.A. seems to me: you get your track, and you stick in it.

The more I think about it, the more I feel like the best part of the Brown program for me was that you learned a little bit of everything, but weren’t cordoned off into one area or another. As much as it’s great that I can now tell a cardellini from a platypus clamp, a flag from a griff, a combo from a c-stand — and as much as I value the beautiful images created by meticulously setting up a shot with several grips keeping bounces in place — I’m so much more charged by the incidental image that occurs when hundreds of birds suddenly fly up from between the cornstalks or the magical silhouette of a church in front of the rising sun. And, call me a purist, but the true magic is when those things happen naturally, not when they’re set up. Even when I don’t have my camera with me, those are the images I’ll never forget.

As my key grip/gaffer Ryan said as he drove the grip truck back in for the last time, beer in hand, “That’s a wrap.” 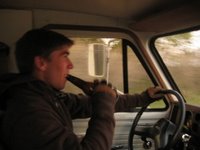