I remember a time when I listened to The Locust every day. Loud. Around this time, I also had short black hair full of pomade, wore tight-ass black jeans, and thought myself rather hardcore. This was around the time I picked up the nickname “Grindcore,” which has, not surprisingly, garnered many friend requests on myspace from grindcore bands, and many jealous messages from naive facebook members who think it to be my “real” last name.

I remembered very vividly today being at a Lightning Bolt show at Ocean’s Coffee on Waterman St. in Providence. People were hanging from the pipes on the ceiling, and it looked like they were going to come crashing down. Not exactly comforting in the same state that had the ol’ Great White Station Nightclub Fire.

(I have decided, while writing this post, to detour momentarily from the dance mix I was making for no particular occasion to listen to some of the music I used to be pretty obsessed with. Right now, that’s Le Shok. Wow, I really, really liked them. Still pretty amazing, but it kind of reminds me a lot of being 19.)

I remember getting a Providence accent when drunk. That really hasn’t happened in quite awhile. Maybe if I drank a lot of whiskey? No, that’s a bad idea ihregahdless.

There was the time at the end of my first year, when I boarded the Greyhound for my 36-hour trip home — much to the trepidation of many of my Ivy League classmates — on which I sat next to an enormous rapper from Brooklyn with whom I spent the overnight portion through Pennsylvania discussing the parallels between punk and hip hop. I remember running through Port Authority with two huge duffel bags, a backpack and a guitar — my whole dorm room, practically — climbing breathless onto the full bus, having him ask me if I’d sing him to sleep, and deciding this was the man to make friends with if I was not to be fucked with. 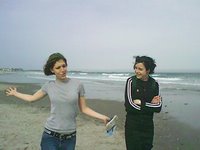 Amy (pictured) and Becky took me to Narragansett before my bus ride. They couldn’t believe I’d grown up without ocean.

I miss the set-up at 72 and 72-and-a-half John Street. On a night like tonight, where I don’t really feel like going out, I’d love to be able to walk across the yard and up the steps to hang out with Taylor, Mark, Ryan or Alex and while away the hours with Rolling Rock and video games. Those were amazing nights. A lot of what I miss about Providence is the spontaneity of it all. I feel like we hardly ever made plans, just kind of ran into each other or stopped by or people stopped by the cottage and we went from there. And the parties seemed different somehow, too. I think part of it was just that people had parties more instead of going to the bars, and then there was always the walking from party to party in large groups, forgetting the distance of the walk, the temperature, or how much your feet hurt or how drunk you were. Somehow you always made it there. (And then there was the Valentine’s Punk Prom, where Darin carried me halfway up the hill because my feet hurt so much from wearing Katy’s heels that I had started walking barefoot on the snow — Darin heaved me up on his back and ran from Benefit Street all the way to the main gate at Brown. And speaking of the main gate, there was the time Alex Provan and I were standing in front of it, both of us freshly turned 19, drinking whiskey from a flask quite obviously, when a Providence Police car pulled up, the cop got out, asked “You kids Brown students?,” and to our trying-to-keep-it-cool “yes” response replied “Have a good night.”) 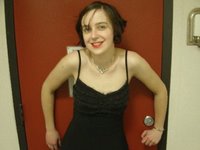 After Valentine’s Punk Prom 2003, before bundling into really warm clothes, turning around and heading back downcity to catch the Greyhound to New York to take part in the major pre-Iraq anti-war protest, sleepless, freezing, wandering the city, drinking in Brooklyn.

I’ll never forget the trip to Boston the night of the “Spring Forward” time change. Some of the group was going to see Milemarker — and I took a detour just now, because I don’t remember who I went to see, but no matter — we all took the Greyhound up, went to our respective shows (I remember it was at the Middle East), got out of the show too late to take the T and so got a way too expensive cab because this is before we all had cell phones to coordinate that the other show goers had actually been waiting for us and were on a Night Owl bus, anyway, we all get back to South Station and realize that we have no idea when our 2:30 AM bus back to Providence will be leaving, considering that the time changed immediately from 2 to 3 that night. After an hour of us tired, smelly punk kids wandering around the station that no one else seemed to be in, shouting about our bus not existing, we found it would go at the new 3:30. An hour later, we all stumbled up the hill back to our dorms, groggy from a bit of bus sleep, wrapped up in our little emo kid scarves, our freezing chucks, our too-thin jackets, not at all suspecting that our “look” would, unbeknownst to us, be picked up by MTV and Seventeen a few years later.

(I’ve taken a bit of a detour during this last paragraph, looking back over an archive of my old blog from those years, trying to find out what show that was. Didn’t find that, but did find a lot of other unbelievably cocky posts about how absolutely rad/sad bastard I was. So much of it, I can’t believe I wrote. And now I just found it — we had gone to see Tristeza and Interpol, right after Interpol’s first EP dropped. February 23, 2002.)

There was a pretty great feeling to being 19.