There is an exciting little development in my cycling life. It involves the beginnings of an all-women’s cycling team. We’re called Sheclismo. It’s an Italian bike pun. Yeah, I had a hand in that.

This morning, we had our first group ride. Though it was billed as a road ride, enough of us were into ‘cross that we made a stop at Van Dorn Park to ride the course there. 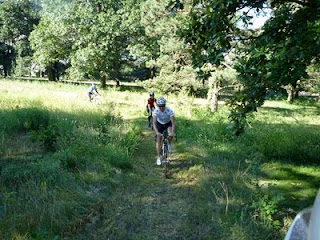 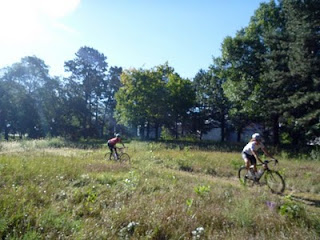 After that, we hit a bit of gravel and then the road. Sydney did a fantastic job explaining exactly what we should be doing, where we should ride, what to do if we couldn’t keep up, and how to work best with changes in wind direction. 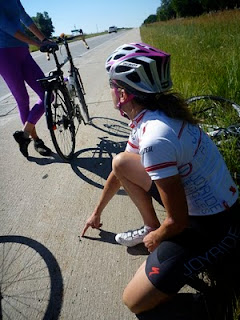 Unlike some group rides I’ve been on with guys, where you’re trying to figure out these techniques being shouted at you while you’re riding and still trying to keep up, we’d stop on the side of the road to discuss. Here, Sydney found some pebbles to make a diagram of echelon formation and how the riders move. 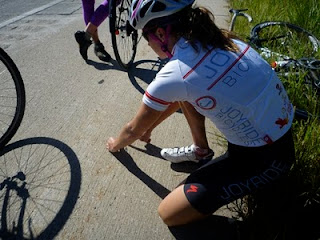 Another cyclist passed by while we were doing this, asking if we needed any help. “Nope,” we said, and “see you soon,” we thought, knowing the speed we’d pick up if doing this properly.

There was a stretch along Roca Road where we were in a crosswind, constantly rotating, and I’ve never felt so good riding with others. We were flying, working together, communicating verbally and non-verbally — as we pulled in to Roca, all with smiles on our faces, Sydney said she’d never seen a group pick things up this fast. 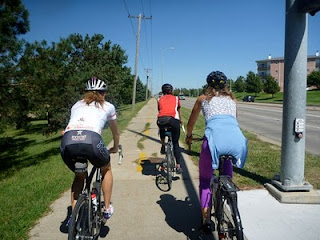 Though several people had to peel off earlier, Sydney, Kat, Liz and I went out through Bennett. Even though I’ve been doing this for a year and change now, I think I learned more today than in all that time combined. More importantly, I think I learned things I can retain, and I left with a fantastically positive feeling about it all.

One thought on “Sheclismo First Ride”