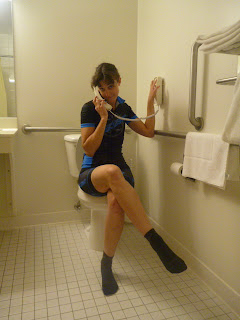 We had a fun trip north last weekend to the southeastern corner of Minnesota for the Almanzo 100 gravel race (and for some travelers, the more daunting Royal 162). Berly and I had an amazing bathroom, wheelchair accessible, which resulted in a full-bathroom shower and a phone next to the toilet, just in case of SHEnanigans… 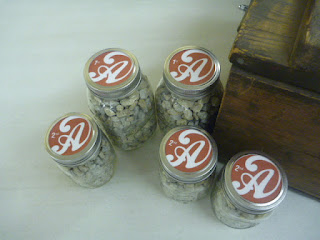 The trophies for this fantastically run, beautifully designed and marketed event are Mason jars of gravel. Rad. I was pretty sure there was no way I was in contention for one of them — with some 550 toeing the line and roughly 100 of them women — but I was hoping for a top-10 female spot. I’ve been getting miles in, mixing disciplines, and in the hot (for MN) and windy conditions, I might actually be better off than the northerners. 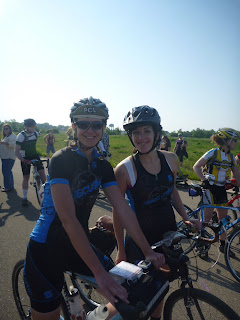 The start was incredible, with riders stretched all along curved road, 6 or 7 across. Berly and I rocked our awesome-looking new kits — looking sleek! 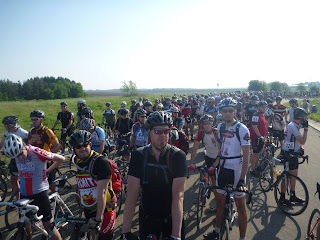 We all sang happy birthday to race organizer Chris Skogen’s son, who just turned 6. Pretty awesome. And then the race began! It was a crazy fast, dusty start, and I moved my way up toward roughly the second or third group. (Though really, there were so many riders that aside from the front pack, it was just lines and lines of bikes.) The first 20 miles flew by. A couple climbs shook things up a bit, and they weren’t like the rollers we have here. Nope, these were half-milers winding up out of valleys with anywhere from 15-20% grades. At least the gravel was somewhere just bigger than crushed limestone, so worrying about white rock traction wasn’t an issue. 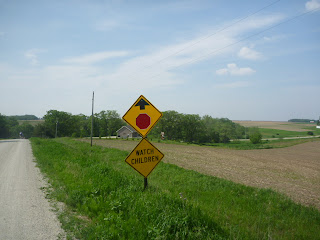 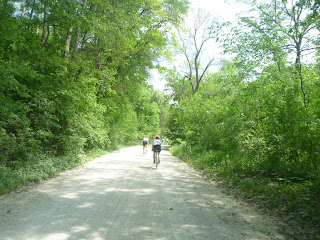 Lots of roads wound through the woods, and the shade offered some nice relief from the sun, which was pushing temperatures well into the 80s. The other benefit was a break from the wind, which was sustained at 30+ mph all day. The crosswinds were the worst — I’ve never come that close to being literally blown off the road before, and found myself in the gutter more than once. And trying to follow wheels of total strangers in conditions like that wasn’t exactly the most comfortable. So while I’d find people to ride with a bit from time to time, I was mostly flying solo. 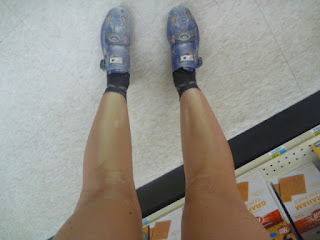 Grocery store water and bathroom stop in Preston, 40 miles in. Really dusty legs. I tried to make this a really quick stop, and it’s debatable whether the roughly 10 minute wait for a real bathroom was worth it. At least it was nice and cool in the store, too.

There were about 20 miles between Preston and the oasis at Forestville State Park, and when I hit the road again, all the people I’d been riding nearby were still resting and refueling. I hit the long headwind climbs out of town alone, burying my head and staring at my cue card begging for a turn out of the wind. It came in the form of Jay Road, the first climb where I got off the bike. Good thing I’d been staring at the card, too, because a pack a little bit ahead of me missed the turn.

These 20 miles felt really long, and the heat and wind were starting to wear on me. In a section with tailwind, I made up new lyrics to “Ain’t Nothing Like the Real Thing Baby” that went replaced “the real thing” with “a tailwind.” You come up with some damn silly things deep into these rides that seem super clever at the time.

It got cloudy, and with all the dust and wind, I started wishing it might rain. Pulled into Forestville, refilled bottles and got some nice cold hose water through the helmet, sat in a lawn chair for about 3 minutes, and mounted back up next to a fellow Lincolnite, Dave McCollough, who I introduced myself to after spotting his Trek Store kit and Cycle Works bottles. It was his first gravel grinder, and he was crushing it on a SS 29er. Way to go! 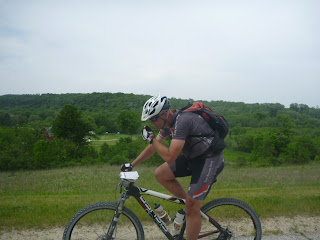 We climbed, then climbed again, then climbed again. Sure, it was pretty, but the winding descents, while super fun, were somehow not making up for all the uphills. Halfway up another climb, 71 or so miles in, I had to pull off the road, get a little “you can do this” pep talk, and stare at this little beer can tree. C’mon. 30 more miles. 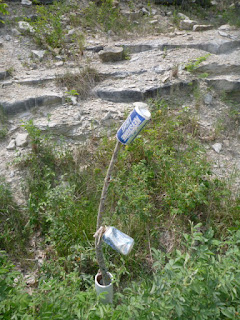 Another difference from our grid system? I’d look at the cue sheet, thinking I’d have say 2 miles of crosswind before turning to a tailwind. But then the road would curve and I’d pretty much feel like crying. On one of those roads, there was suddenly someone passing me kind of slowly, and then I saw the camera, and then…”CORNBREAD!!!” Oh, I was so happy to see a familiar smiling face. Nevermind that he had 60 miles on me at that point. 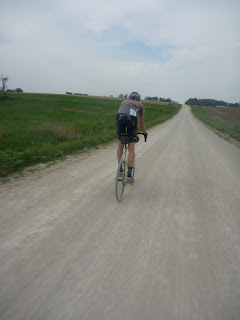 I hung in his draft for a couple miles, but eventually, around when I fumbled for my camera to take this picture, I lost contact. I was glad, too, because I didn’t want him to slow down because of me. But damn, that was a nice draft.

The last 25 miles were pretty excruciating, despite there being a couple sections with pretty righteous tailwinds. I was having a lot of trouble breathing again, and anytime I took a deep breath, my lungs would go through sharp and excruciating pain. Full of dust, tired of working so hard. I started leapfrogging with a couple groups and a couple women, and there was a glimmer of competitiveness that snuck back in. Maybe I was top 20? Maybe higher? If that woman is the difference between a top-whatever spot and not, should I try a little harder?

I ran out of water for the third time that day. A couple riders — all of a sudden, I met like 3 guys named Dan, maybe I was hallucinating — gave me fluids, one some horribly opaque pink thing I had to hand back for fear of what havoc it would wreak on my system. I was staring at my computer…10 miles, 9, then 8…ok, this is like a ride to Pepe’s, 5, more blasted headwind, almost there, watertower visible…and then pavement. Highway. Headwind. I tucked my head down and threw it in a big gear, so ready to finish.

At the line, people were cheering and Chris was there waiting with a handshake. Super classy. It was a perfect way to finish. 8 hours, 39 minutes, with 8:11 of it ride time. According to the roster (and not sure of gender on some names), that made me either 8th or 9th among the women, 179th overall. 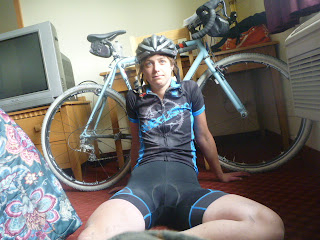 Big thanks to Sam & Skip at War Axe and Eric at Monkey Wrench for putting together a fine, fine bicycle for me. Not only was I comfortable and confident, but I was getting compliments on it all day. That definitely makes a girl feel good. 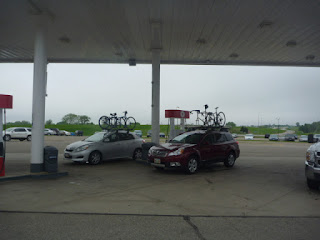 And more thanks to my Nebraska gravel travel crew. Had a blast with Berly, Rafal, Cornbread and Schmidty, as well as with Dave and Andy. Next up: a bit of time off, Ponca, and then Odin’s Revenge!

2 thoughts on “Minnesota Gravel at the Almanzo 100”