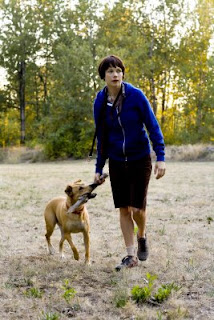 The portentous opening shots of trains in Wendy & Lucy leave no doubt exactly where Wendy Carroll (Michelle Williams) is headed, but the hour and twenty minutes we spend with her over the few days she spends in an unnamed Oregon town are no less entrancing.

(Un)necessary brief plot synopsis: A 20-something woman named Wendy is en route from Indiana with her dog Lucy in search of seasonal cannery work in Alaska. She’s got short hair, wears a blue hoodie, western shirt & cut-off corduroy shorts, drives an ’88 Honda Accord, and it breaks down in a town in Oregon. This is one of a few things that do not go well and leave a major dent in the sum at the bottom of the page in the meticulously kept notebook in which she tracks her dwindling finances. 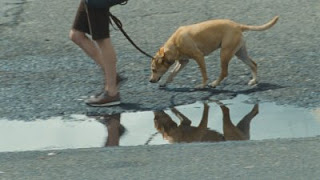 Oh, the beauty of film! Shot on Super-16, Wendy & Lucy is full of impeccable colors, especially in forest scenes, gorgeously done night scenes full of all the grain that results from an optical blow-up to 35mm, and depth of field simply not possible on video. 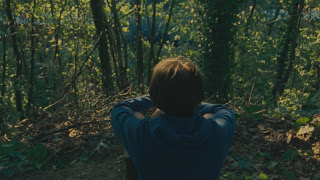 As Lucy (played by Reichardt’s dog) makes friends with a group of crust-punk types around a bonfire and Wendy follows to retrieve her, Reichardt’s camera seems to become perspectival, focussing* from face to face as if Wendy is gauging trustworthiness. It is, in my mind, the fact that this is a female eye (lens) tracing the path of the female protagonist’s eye that makes this scene work; were the camera to float away from the person speaking (a drifter played by Will Oldham) to other faces around the bonfire — including lingering shots on the only other and very tough-looking female of the group — without the distinct sense that we are engaged in the self-aware nature of Wendy’s position as a solo female traveler, this would appear a sloppily edited sequence. In a far more dramatic echoing of the sense in this scene later in the film, I began to think that I had never seen such material shot in that manner before. There are simply so few women making films that it is hard to make a compelling case that the gaze of the female director is different, but this film makes solid strides in that direction. 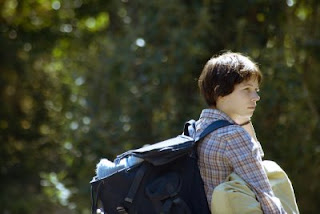 Furthering its minimalism, the film eschews a score, opting instead for a repeated theme — composed by Oldham and played slighlty amplified — of Wendy humming. The overt pathos of dramatic orchestral elements would ruin the pain we feel, slowly & experientially, for Wendy’s predicament. Reichardt lets moments happen. Birds fly by, high in the air, and it is clear from the focus-pulling that this was a shot taken because it just happened. It is downright beautiful. 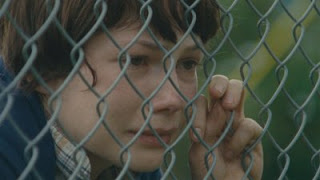 Reichardt is a gifted, principled director. The full text of a fantastic interview done by Slant Magazine is worth the read. A professor at Bard College, she gives solid pushback when the interviewers begin asking questions about how her filmmaking might change with the onset of “success.”

Slant: You’ve talked before about wanting to continue working at these sensationally low-budget levels. Isn’t that something filmmakers tend to say and then disregard once they meet with a certain level of success?

KR: Well, what’s your definition of success? I find that to be a fucking annoying question, I have to say.

Slant: Why is that?

KR: This constant implication that success has one picture is so limited—and talk about American! I’m constantly asked this, as if teaching is some loser profession, or an uninteresting place to be. I’ve been out in L.A. for five days with my film, just doing stuff that I’ve never done before, press junkets and stuff, and I’m like—this is it? This is what everybody thinks is the most special fucking thing on the planet? Are you kidding me? It melts your brain. It’s really hard to stay small, actually. That I’ve been able to make these last two films without anybody paying any fucking attention and just go off and have complete artistic freedom—what are you gonna trade that for? What do you consider success, since you’re asking me that question?

Slant: I think I was just suggesting that if you were to raise more, you’d probably spend it wisely. There’s no discernable difference between the scale of your films and a Woody Allen film, but he can spend 20 million and the money buys access to more filmmaking tools and sought-after actors and so forth.

KR: Give me an example of a woman who can do that.

Slant: A woman who can insist on creative control and still raise 20 million?

Slant: I can’t name any, but I have a reason why I can’t.

KR: I have a reason too—there aren’t any! Okay, forget about 20 million. Name a woman at the level of Gus Van Sant or Todd Haynes. Give me a female example of that.

Slant: Allison Anders. In 1996. I can’t think of any on the spot, but in that category I know there are some.

KR: And she wasn’t getting 20 million, by the way. She was living off a grant. Please. The idea that we’re struggling to think of one that might have existed at some point—maybe that’s why that question pisses me off. I’ll also say that I can’t think of a woman who has this benefit either: Lars von Trier and Terrence Malick can put out films and not have to go out and talk about them. If I want to think about what real success would be, it would be to be able to make a film without anyone breathing down my back and then not have to go out and talk about the film after you’ve gone to great lengths in your film to not over-explain everything. To not have to go out, that would be true success, but then you’re just screwing over your distributor or your investors.

*I read the New Yorker. This is the spelling they use. I like it. Deal.

Images from the film’s press site