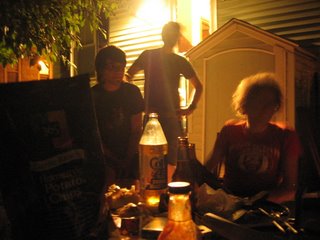 I have loaded several photos from the trip onto flickr. nocoastphotos. Enjoy.

So Monday night, after some of the most stupidly hot weather ever, a great group of people met at a park in the North Bottoms to play kickball. One special rule: second base is a cooler of beer and two players are allowed on that base. My team, Team Bird, pulled out a secret weapon in the 7th inning stretch, namely a basket full of water ballons that were promptly launched at the pitcher while one of ours was at bat. This is the Summer of Awesome.
After kickball, I drove Patrick and Adeline Wilkens home, and after the little lady went to bed, Patrick and I had a wonderful extended conversation about Lincoln, and particularly this summer/last six months. I will miss him.
(Addendum: Yesterday, after work, I saw Patrick driving by at an intersection. It made me smile.)