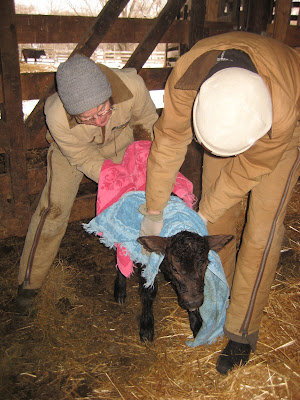 A little early start this year, but as Mami said today, “At least now, it’s February!”

Last Sunday, a first-time mother gave birth to a little bull calf. It was very cold, and beginning to snow, so my mom & Chris carried the calf into the barn, where we’d put down some straw. Generally, the cow will come right along, but this mother was preoccupied with trying to eat, and didn’t follow her still-wet and becoming icy little one. My brother toweled off the calf as it tried to nurse on his knee. We tried for quite some time (about 2 & 1/2 hours) to get the cattle all to come into the barn, hoping to be able to separate the mother out and pen her in with her calf, to no avail. Finally, well after dark, well into the snowstorm, and after all we kids had given up, my parents gave up, too.

Monday morning, the first day of the Year of the Ox, Mami went down to feed and found cow with calf. There was another bull calf born this week, too, though thankfully, there was some warmer weather this weekend.