With the election only 6 days away, I’ve had a couple incredibly hectic days of work — the kind where you’re working on one thing for 10 minutes if you’re lucky before you have to turn to something else and then the phone is ringing and suddenly within the time that you’re writing one e-mail there are 5 more in your inbox. A little stressful, no doubt.

It’s also incredibly exciting, though, not only that our race is heating up but for all the races around the country — there’s an incredible feeling of momentum and a positive feeling about politics that I haven’t felt since becoming frustrated after the 2000 election. At that point in my life, I had invested personally a great deal; I formed my whole rationale about college and the extracurricular decisions I made in high school based on my intentions to enter politics, with my ultimate goal being to become a U.S. Senator.

Things changed pretty quickly. After the unbelievably disappointing 2000 elections — for which I’d spent hours and hours of my after-school time working for the Democrats while filling out my college applications — I kept with it for the local elections of May 2001, right before my high school graduation. There was one great school board victory and a few surprising city council losses. I still left for Brown that fall thinking I’d study politics, but then one week in, hearing about September 11th and going that day to my Introduction to Modern Culture and Media class, my attitude toward it all changed dramatically. Through that semester, I became more and more entrenched in media theory, began to view politics as inextricable from culture and mediation. My political science class didn’t do it for me, and two semesters later, I was full-on invested in the MCM department. Though I never became wholly disinterested in politics, it definitely took a backburner for the duration of my time in Providence, due in part certainly to the fact that I was living in a truly liberal climate for the first time in my life as well.

Now, however, I feel like I have come to a nice synthesis. I delight once again in being a bit of a political junkie, but yet I still retain the skeptical eye media theory has grown in me. I am comfortable with the discerning eye with which many fine liberal blogs view the media and politics. It’s not perfect, no doubt, but it is wonderful to read the writings of people whose passions are politics and the media, rather than simply digest what is presented by those who make it their career, those often edited by others more concerned with advertisement and ratings. 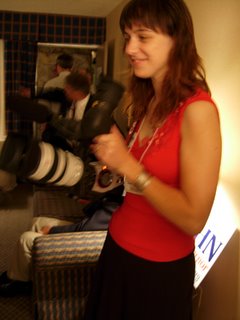 The last 8 months have been one hell of a journey for me. From all the shooting scenarios I’ve encountered on the campaign trail to the confidence with which I’ve felt compelled to advise David Hahn and the receptiveness he’s demonstrated in discussing decisions regarding media, politics and the future with me, I’m happy to say it’s been a very rewarding experience.

The countdown begins now. Come have a drink or two with me at the election night party — Haymarket Theater, 7pm – 1am … free beer, karaoke, and more.

One thought on “Anticipation”